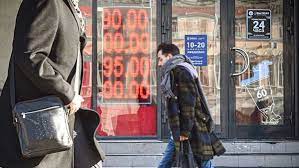 Russia’s ties to the global economy are rapidly unwinding as crushing sanctions and the Kremlin’s response upend decades of post-Soviet reforms.

The Kremlin announced strict banking and export limits meant to prop up its currency’s plunging value this week at the expense of foreigners. Moscow has also pledged to seize the assets of any business leaving Russia and allow its companies to steal Western patents.

Experts say the fallout could last long after the war in Ukraine ends and tarnish Russia’s standing for decades, even if sanctions are eased.

“Measures like this are going to stay in place for a long time. I think this is going to cut Russia off from access to Western finance, trade and investment for years, if not decades, to come,” said Edward Alden, senior fellow at the Council on Foreign Relations.

“The conclusion will be now that Russia is both an immediate and long-term threat to European and American security, and economic ties with Russia are going to strengthen Russia, and anything that strengthens Russia is dangerous for the West,” he added.

President Biden announced the U.S. and Europe would end normalized trade relations with Moscow and seek its removal from the World Trade Organization (WTO), the latest blow to the Russian economy. He also announced the U.S. would ban certain iconic Russian imports, such as vodka and seafood, amid growing pressure from lawmakers.

Kicking Russia out of the WTO and ending normalized trade relations would subject Russian exports to higher tariffs and trade barriers.

Experts say the decision has a limited economic impact, especially as sanctions limit trade between the nations, but sends an important message to the Kremlin.

“It’s not going to be a huge punch, candidly, just because of the nature of the trade flows and the actions we’ve already taken,” said Emily Kilcrease, senior fellow at the Center for a New American Security.

“Nonetheless, you’re doing it with allies, so that will boost the economic impact. And I do think it’s a really important step to show that we’re not going to let Russia freeride on a rules-based system without actually being constrained by it,” she added.

The Kremlin and Russian Central Bank have taken extreme steps to prevent the ruble from further devaluation and retaliate against crushing Western sanctions. Russia announced it will halt its foreign exports of grain, ban the purchase of dollars and other foreign currencies and limit the amount of foreign currency Russians can withdraw from their bank accounts.

Russia has frozen its battered stock market since the start of the invasion to prevent investors from pulling their funds. Russia has also begun to default on its bond payments, causing its credit rating to plunge amid a mass exodus of foreign businesses.

In response to sanctions and public outcry, more than 300 multinational corporations have suspended some or all of their operations in Russia, including iconic American brands such as Apple, Visa, McDonald’s, Disney and Coca-Cola. Russian citizens are no longer able to use many of their credit cards, watch Netflix shows or even purchase new electronics.

“It’s pretty clear that Russia will become poorer and more technologically backward, the choices for its citizens will be radically diminished and for many, many years to come,” Alden said.

That’s an astonishing series of penalties in a very short period of time,” Alden added.

Putin has vowed to seek “legal solutions” to seize the assets of Western companies that leave the country. The Kremlin aims to take control of businesses with foreign ownership of 25 percent or more and then auction them off to Russian investors.

Moscow is already refusing to return hundreds of airplanes it leased from Western companies, which have a combined value of $10 billion. Russian lawmakers are also weighing taking over auto plants owned by Ford, Stellantis, General Motors, Volkswagen and Toyota, among others, and multibillion-dollar energy projects partially owned by ExxonMobil and BP.

U.S. business leaders and even one of Russia’s wealthiest oligarchs say that the move will effectively bring an end to international investment in Russia, potentially causing permanent damage to the country that would linger even if sanctions were eventually lifted.

“This would take us a hundred years back, to the year 1917, and the consequences of such a step would be the global distrust of Russia from investors, it would be felt for many decades,” Russian billionaire Vladimir Potanin said in a statement Friday on the Telegram messaging app.

Neil Bradley, chief policy officer at the U.S. Chamber of Commerce, the nation’s top corporate lobbying group, said in a statement that such a step “would only add to Russia’s increasing isolation, show its disregard for the rule of law, and ultimately inflict more pain on the Russian people.”

The Kremlin has only worsened investor fears by greenlighting a rule that allows Russian firms to steal intellectual property from companies that are home to “unfriendly” nations such as the U.S. and its allies. Under the Kremlin’s plans, Russian oligarchs could take over assets such as Coca-Cola’s bottling factories or Ford’s commercial van manufacturing plant and attempt to continue to manufacture and sell those products under the existing brand.

Steven Fox, founder and CEO of Veracity Worldwide, a consulting firm that advises businesses on geopolitical and regulatory risks, said the controversial moves amount to a “nail in the coffin” for foreign investor appetite in Russia.

“There were always questions with regard to the rule of law in Russia from an investment perspective, and intellectual property theft has long been a concern,” Fox said. “Now, that’s all out in the open, there’s not even a semblance of law.”

Experts do not think that Russia will find success replicating corporations’ activities. Moreover, the Biden administration has pledged to respond with even more sanctions if Russia follows through with its nationalization and patent plans.

“Any lawless decision by Russia to seize the assets of these companies will ultimately result in even more economic pain for Russia,” Psaki tweeted. “It will compound the clear message to the global business community that Russia is not a safe place to invest and do business.”