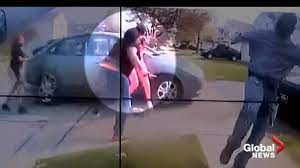 The officer who fatally shot 16-year-old Ma’Khia Bryant last year was cleared of wrongdoing after a grand jury dropped all charges against him.

The grand jury did not find probable cause that Columbus police officer Nicholas Reardon committed a crime, according to ABC 6.

The president of a local Fraternal Order of Police lodge said the news was “pleasing to hear.”

“It’s always sad when there is a loss of life, however, the actions of the people at scene, caused him to take action that saved lives and he is trained very well,” Fraternal Order of Police President Jeff Simpson told ABC 6. “He did his job, and it is a good outcome.”

In April 2021, Reardon responded to the report of an attempted stabbing in Columbus. When the officer arrived, 16-year-old Bryant was swinging a knife at two people. Reardon responded by shooting the teenager four times.

The Ohio Bureau of Criminal Investigation opened a case into the incident but the family also called for a federal investigation into the shooting.

The Department of Justice eventually agreed to review practices of the Columbus police department, The Associated Press reported.

Michelle Martin, an attorney for Bryant’s family, said she and family members were “disappointed” in the grand jury’s decision to drop charges and said the foster care system in charge of the teenager had failed Bryant.

“Ma’Khia’s family has long wondered why this officer opted for lethal force even though there should have been other non-deadly options available to deal with this situation,” Martin told ABC 6. “We believe that the tragedy that ultimately resulted in Ma’Khia’s death started long before she was shot and killed by a Columbus police officer.”

“She was a child,” Psaki said.

Grimes reveals secret birth of second baby with Elon Musk: ‘I’m not at liberty to speak on these things’

Former President Barack Obama Reveals He Has Contracted Covid, Has Some Symptoms