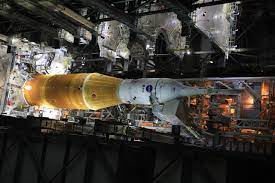 NASA will hold a media teleconference on Monday, March 14 to discuss the upcoming debut of the agency’s Mega Moon rocket and integrated spacecraft for the uncrewed Artemis I lunar mission.

Roll out of the integrated Space Launch System rocket and Orion spacecraft to Launch Pad 39B at NASA’s Kennedy Space Center in Florida is slated for Thursday, March 17.

The media call will begin at 5:30 p.m. EDT after completion of a test readiness review, which will determine if the agency is ready to move forward with mission activities. The call will air live on the agency’s website.

To participate by telephone, media must RSVP no later than two hours prior to the start of the event to: ksc-newsroom@mail.nasa.gov.

Live coverage for rollout begins at 5 p.m. EDT on Thursday, March 17 and will include live remarks from NASA Administrator Bill Nelson and other guests. Coverage will air on NASA Television, the NASA app, and the agency’s website.

At the pad, NASA will conduct a final prelaunch test known as wet dress rehearsal, which includes loading the SLS propellant tanks and conducting a launch countdown.

The rollout involves a 4-mile journey between the Vehicle Assembly Building and the launch pad, expected to take between six and 12 hours. Live, static camera views of the debut and arrival at the pad will be available starting at 4 p.m. EDT on the Kennedy Newsroom YouTube channel.

Through Artemis missions, NASA will land the first woman and the first person of color on the Moon, paving the way for a long-term lunar presence and serving as a steppingstone on the way to Mars.

Grimes reveals secret birth of second baby with Elon Musk: ‘I’m not at liberty to speak on these things’