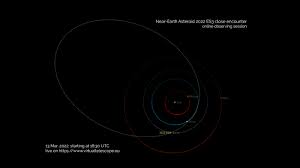 You can watch a big asteroid make a safe flyby of Earth today (March 13) from any spot with good internet access.

Asteroid 2022 ES3 is up to 40 feet wide (12 meters) – about the size of a bus – and will pass within 207,000 miles (330,000 kilometers) of the Earth today, according to NASA. The Kitt Peak National Observatory in Arizona discovered the asteroid on March 7 and, as is typical for near-Earth asteroid finds, published the orbit and other details of the asteroid’s movement and size online.

“The Virtual Telescope Project will show it live, online, just at the fly-by time. This way, you can join the journey from the comfort of your home,” the project’s founder Gianluca Masi wrote in a website statement. He is based in Ceccano, near Rome, Italy.

The asteroid is not considered “potentially hazardous”, according to Newsweek, probably due to its size. According to NASA JPL’s Small-Body Database, the asteroid has an estimated diameter of 30 to 40 feet (10 to 22 meters).

Masi says the closest the asteroid will approach Earth at a safe distance that is about 87% of the average distance from Earth to the moon. The moon is typically about 238,855 miles (384,400 kilometers) from Earth.

NASA watches for asteroids through partner telescopes and space observations, coordinated through the Planetary Defense Coordination Office. While the agency has found no imminent problems, it does test out asteroid defense technologies to be proactive.

An example is the 1,210-pound (550 kilograms) DART spacecraft, which will slam into a small asteroid named Dimorphos in September or October. The aim is to change the orbit of this asteroid around its larger companion, Didymos.